I’ve been trying to decide since Wednesday night if I should be angry that we lost at Northwestern. I’m still not sure.

I think I’m supposed to be mad because this is Northwestern we’re talking about here. And 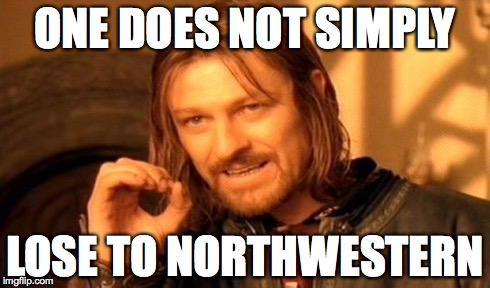 Then I kept seeing the graphic about IU being 4-8 in the last 12 meetings with Northwestern. And that should be infuriating because (see above).

I went to a loss at Northwestern in 2004 and stormed out of Welsh Ryan in a state of near rage at our “HOW IN GOD’S NAME DO YOU LOSE TO NORTHWESTERN!” state of being.

We’ve had trouble with them for a while, which should make me angry, but mostly that was because we just couldn’t seem to figure out how to defend a backdoor cut for almost a decade. Which should also make me angry. It has certainly perplexed me from time to time. But it doesn’t really make me angry.

And then I think about that 4-8 graphic. And that makes me mad. Not because we’re 4-8 in our last 12, but because since 2012 we’re 3-2. It’s the previous 7 meetings, post-Sampson, where we are 1-6. If you were willing, at the time, to forgive and understand the fact that we lost to EVERYONE for 3 years,  you can’t now use those exact same losses to justify being mad about our recent track record against Northwestern.

So many people want to base all of their expectations for IU basketball on their memory of 30 years ago, but steadfastly refuse to remember five years ago. That’s infuriating to me.

Much more so than losing to Northwestern.

But I still think I should be mad about losing at Northwestern.

Then I realize that if I had the same emotional responses to things as I did when I was 11 years old that would be a spectacular example of a disturbing lack of emotional growth and maturity. And that would be terrible for me as a human being, and probably for everyone around me. So, maybe, my ability to take this loss as what it is, a loss on the road to a team that’s playing well, while we are not playing all that well (at least not consistently), is a sign of true emotional growth and that I should be quite proud of myself.

On the other hand, what if I can’t feel the joy at our wins without feeling the crazy anger at our losses? After all, I want more than this from my life.

I want it all: the terrifying lows, the dizzying highs, and creamy middles. Sure, I might offend a few of the bluenoses with my cocky stride and musky odors – oh, I’ll never be the darling of the so-called “City Fathers” who cluck their tongues, stroke their beards, and talk about “What’s to be done with this Jeff Taylor?”

And how do I achieve Homer Simpson levels of crazy, unstable, emotionally charged responses to everything that happens in my life without letting this loss ruin my Thursday, the way losses like this used to do?

I honestly don’t know. But here I sit, in an emotional quandary, over my lack of irrational rage.

While I try to figure that out, let me briefly discuss what stood out to me as the big issue with our offense during that 10 minute stretch where I scored as many points as the rest of the team combined.

Northwestern closed out on our shooters much better than they did in the first half, so our shots were a little rushed, and we missed them all. How is it possible for them to close out so much better when our spacing hadn’t gotten appreciably worse?

Here’s how. Northwestern had a giant snowman in the center of the lane who loves warm hugs and his mere presence seemed to scare all of our ball handlers in much the same way that Frankenstein is afraid of fire.

We kept driving into the lane and kicking it out to shooters who weren’t quite as open as they’d been before. Because no one on Northwestern thought that the end result of a drive into the lane would be anything other than a kick out to the shooters.

We stopped challenging the Olah and trying to score at the basket, because for some reason, unknown to mortal man, we missed all of our free throws.

So, it went like this. We drive and we miss the layups, but it’s cool because we got fouled and went to the line. Except we missed the free throws, which isn’t cool. So, we stop trying to take the lay ups because we’re just gonna miss them anyway, and get fouled, and then miss the free throws. So, we keep driving, but only kick it out.

It wasn’t until Troy decided to throw in an awkward half-dunk-half-lay-up thing that things opened up for us. But it was too late.

And all of this would worry me more, except that I know who this team is now. AND NOT A MOMENT TOO SOON. We can win any game. We can lose any game. I wouldn’t be surprised to see us get to the weekend games in the Big Ten tournament then to the Sweet Sixteen in the NCAA. I also wouldn’t be surprised if we came out against Iowa with all of our shoes mysteriously tied together in knots that cannot be untied, resulting in so much falling over and bumping into things.

So, maybe I shouldn’t really be mad. Because when something is completely predictable, what’s the point of getting mad about it.

Now, please excuse me. I have to go curse the snow and cold.