Calling Max Bielfeldt almost got a whole lot easier yesterday. AJ Guyton, clearly touched by Max’s gesture of maturity and sincerity, posted a photo of a hand-written letter from Max apologizing for the embarrassment that the actions of current and until-recently current players have caused to former players. With 7 of Max’s ten digits clearly visible for the entire internet to read.

But AJ’s internet faux pas isn’t the story. For me, the story is why did he do this, and what is the reaction?

My immediate reaction to this was: Crean made him do this.

AJ didn’t jump to that conclusion, but to me it seemed pretty obvious. Here’s why:

The Case for the Obvious 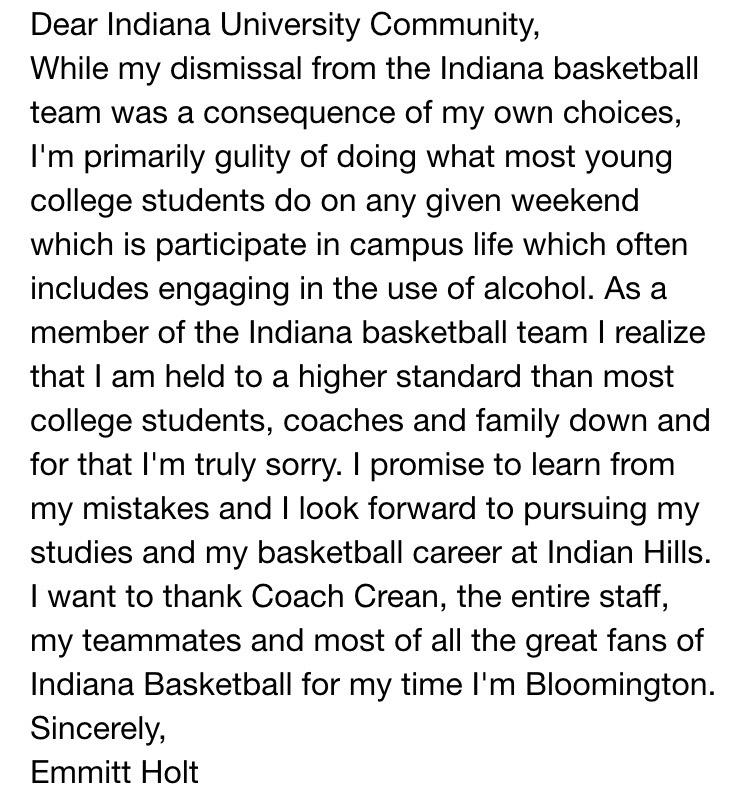 It was the heartfelt apology of an 19-year old. You can tell because even when he’s apologizing he makes it clear he thinks he’s being treated unfairly. “I’m primarily guilty of doing what most young college students do on any given weekend which often includes the use of alcohol.”

“Everyone else is doing it” is pretty much the default setting for teenagers. And that’s how you can tell Emit wrote this, and not the PR wing of any athletic department.

2. Kids don’t voluntarily apologize for the actions of others without some prompting.

My four-year old does. But he still rats on himself when he gets in trouble at school and asks me, “Why is it raining?”

Even your most responsible 22-year old will not step up and apologize to someone he doesn’t know, who was only indirectly effected by these actions.

That’s some Abigail Adams stuff right there. I’m almost 40 and I haven’t carried a pen in over a decade. Do you really think today’s college kids write hand-written notes to strangers?

4. The envelope it was sent in was as carefully chosen as sending the football season tickets wrapped in an IU flag.

None of the Emit Holt, “I just did what everyone else does, but I got in trouble, so sorry.” stuff. It was personal. It was contrite. It seemed sincere. This was approved by an adult.

And then, Todd Jadlow got one from OG Anunoby. Todd’s response was even better than AJ’s. It was basically, can someone tell me what happened and who this kid is? Oh? Really? Crean made him do that.

So, yes, this is a punishment/public relations move by the program.

My response to that is the same as my response when people say, “But you know wrestling isn’t real, right?”

That’s my response. So what. Die Hard isn’t real either. Doesn’t mean it isn’t awesome.

So What. Just because it wasn’t Max’s idea doesn’t mean it isn’t a good thing to do. But it took me a little while to get there.

As I was rolling this over in my mind yesterday I kept asking myself, “Self, why are you being so cynical? Couldn’t a kid just take it upon himself to do this because he felt bad and wanted to reach out to someone who meant something to him as a child? What does it say about the program that my first assumption is that this was done by fiat?”

Then I realized that this isn’t cynicism. Cynicism implies that there’s a value judgement to be levied upon this action. But there’s not. There are a lot of reasons why this is a good thing to do.

1. There’s absolutely nothing wrong with this approach to behavior modification.

2. Further, I know that a lot of former players are not pleased with this stuff and reject the notion “that this happened in their day, but it’s just more public now.”

3. It’s a nice gesture from the players and the program to apologize to those who came before them.

4. It could help to mend some fences between the past and the present.

5. Crean has said repeatedly that they are imposing internal discipline on the team and while no one thinks he’s lying, no one thinks it’s been particularly effective either. So, if what you’re already doing, be it mandatory curfews, running the stairs at 4:00 am until you puke, loss of social media access, Chinese Water Torture, or whatever he’s been doing, isn’t working. Try something different. Try to reach them with a different consequence.

Good for him thinking outside the box like this. I don’t know that it will work. But it’s certainly worth a shot.

And if, while the players are apologizing to former players, some of those alumni share this with the public and it makes these kids look like good, respectful kids who care about the program the way the fans do, so much the better.

Did the players write letters to every former player, or did they each get to choose one?

I saw on a message board that Jordan Hulls got one too.

Did players get to choose who they wrote to?

Did the players just pull names out of a hat?

How big was that hat and whose job was it to type up all the former player names and cut them into tiny strips?

Did they put Jordy’s name in the freezer first so someone would feel it and pick it, like when the NBA rigged the 1985 draft for the Knicks?

Did players try to trade who they got, like when you get Almond Joy from the piñata and you hate coconut?

I wish I was a reporter, or cared enough to try to find out the answers to these questions. If you know, please pass along that info.

The Part where I tell you that you’re wrong

1. If your reaction to this was, “Oh, what nice boys.” Don’t fool yourselves.

This wasn’t their idea. It doesn’t mean that aren’t nice boys, but it doesn’t make them angels either.

2. If your reaction is, “This is meaningless. They were just doing what they were told.” Lighten up, Francis.

And not for nothing, adults make kids apologize for things all the time.  Just because a kindergartener isn’t heartfully remorseful that they just stepped on some poor lady’s foot as he ran through the grocery store, doesn’t mean bringing him back and making him apologize isn’t the right thing to do. It reinforces that they did something wrong and makes them stand up and admit it. It’s part of how kids learn not to be jerks.

3. If your reaction is, “Great. More talk. When are we gonna see some actions?” Shut up.

You don’t really want to see actions. You want to see results. If Crean yelling at the whole team once took care of the problem it wouldn’t be less valid than if he’d made them run wind sprints for 25 days straight. So, if this is the approach that finally sunk in, AWESOME! And you think so too.

You’re just tired of the team showing their asses in public all the time. And again, if the other stuff didn’t work, what’s the harm in trying something different?

This is a zero-downside move by Crean and the program.

Unless you’re the person who has the exact same first 7 digits to your phone number that Max has. Then, I’m guessing you’ve gotten a few prank phone calls.